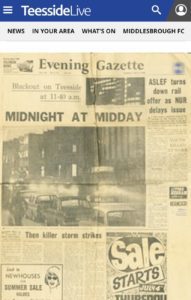 The article was produced following a bizarre weather event in July 1968. The month  was a very active one for thunderstorms and featured one of the greatest falls of Saharan dust in the UK in recent times.

July 1968 Generally dull, cool, and wet, especially in the south, but with two exceptional thundery outbreaks. The first ten days were very active. A slow-moving cold front ended June’s hot spell on the 1st, which saw temperatures of 33C in London, with severe and prolonged thunderstorms in the north and west, with darkness at noon, from mid-morning on the 1st to late afternoon on the 2nd. A hailstone at Cardiff airport on the 1st measured 7×6 cm. I wouldn’t like that to fall on me. Lightning deaths on the 1st. The rainfall on the 1st was accompanied by a notable dustfall, comprising sand carried from the Sahara. The rain was said to be coloured “red and brown”, so that on the morning of the 2nd much of the south was covered with brown streaks. On 2 July, 35.7 mm rainfall fell in just under 9 minutes at Leeming Bar (Yorks), giving a sub-10-minute rate of 238 mm/hr, a UK record for such a short time (until 2003) …. Deep drifts of hail on the roads in Yorkshire needed bulldozers to clear them. More exceptional storms on the 9th, this time in the southwest.

There’s an article about the storms on Wikipedia here. It says “The July 1968 England and Wales dust fall storms were the most severe dust fall storms in the British Isles for over 200 years.” The article lays out the causes and meteorological conditions at the time. The squall line apparently ran up from Devon, along the England–Wales border and up across Northern England to the River Tees at Teesside. It seems that Teesside was on the Northernmost boundary of the dust although that boundary might have resulted in the heaviness of the rainfall.

The Met Office also did a detailed investigation into the dust storms here.

It certainly seemed an extreme event. I had moved with the family a year earlier in 1967 from Fairfield in Stockton, Teesside, so didn’t personally witness the storm. These are the some of the stories about the day from those who did.

“THE KILLER storm which battered Teesside at 11.40am on July 2, 1968, unleashed a freaky weather terror still talked about with awe 40 years on.

Midday turned into midnight — and those who were there have never forgotten. The day has gone down in local folklore as The Day the Sky Turned Black.

In the inky darkness, a weird and frightening steamy hot Teesside was hit by thunder and lightning, monsoon rain and icy hailstones the size of gobstoppers.

An elderly woman walking her dog in Northallerton was killed by a lightning strike.

Petrified people, convinced the end of the world was nigh, dropped to their knees to pray in town centre streets awash with water.”

Traffic came to a standstill as lumps of ice bounced off windscreens, making driving impossible. Families screamed to be rescued as rivers of rain raced into their homes. Frightened schoolkids were hurried in from the playground to cower under desks while worried teachers tried to keep them calm. Terrified housewives who had hung out the washing to dry in the July sun, struggled to bring it in before it was blown away. Some, like Betty Jobling, now in her seventies and still living in the same house, ran to hide in cupboards and ‘coal holes’ praying for deliverance from The Great Blackness.Plants were broken and gardens wrecked as a record 1.10 inches of pounding rain fell in just 10 minutes.

Those who remember say the downpour was so fierce the raindrops bounced back up to 18 inches off the pavements. The first sign of trouble came when the sky turned an ominous sludge green. Then came the great blackness. Amateur metereologist Gordon Currie who lived near Great Smeaton, said at the time: “I have never seen anything like it.” He put forward the theory that a weather front of humid air from the south met up with a stream cooled by North-easterly winds. They clashed in a swirling vortex which caused particles of ice to grow bigger and heavier as they were sucked to the top of the cloud — before falling to earth.

An Evening Gazette photographer snapped Borough Road at the height of the blackout with the headlights of cars crawling to a standstill and every window beaming out light.

Brian Whaite who lived in Ingleby Barwick was working for builders in Billingham at the time. He said there was a sudden flash of lightning and a woman ran screaming from her home shaking with fright and carrying a newborn baby. He said: “The rain lifted manhole covers and the torrent caused them to spout like whales. It’s a day I won’t forget in a hurry.”

By the middle of the afternoon, Teesside was simply overcast as the clear-up operation got under way. But it was a day branded for ever on the memory of families who still tell the tale of The Great Darkness. THE legend of the great blackness was often talked about by Paul Walker’s dad and his brothers.

“In fact in my twenties I was in a band called The Storm which was named after the event,” said the 42 year-old. “I think The Great Darkness may have been an even better name. “Sadly we never did storm out of Stockton — the forecast was as bleak for us as it was for Teesside that day! “And the event was certainly more memorable than anything our band ever did.”

Paul’s late dad Norman was 32 and working in menswear shop Weaver to Wearer on Stockton High Street when the Teesside terror struck.

“He told me the sky went green suddenly and then black,” said Paul who now lives in Sheffield. “There were people dropping to their knees to pray in shop doorways and on the street because they thought the end of the world was nigh. “It was like the Four Horsemen of the Apocalypse had arrived. “One of my uncles was a teacher at St John’s Infant School and he said all the children were brought in because it was so frightening. “The storm was so significant that he and his brothers remembered it all their lives and when they got together it crept into the conversation.” On the other hand, Paul’s mum Elizabeth was back home in Fern Park looking after two-year-old Paul and can’t remember a single thing about it.

PENSIONER Betty Jobling was a terrified young mum racing to hide under the stairs when the storm struck. 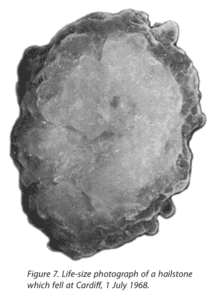 “I was taking in the washing, but it was so terrible the sheets trailed on the ground in the rain as I ran to hide in the cupboard,” said 72 year-old Betty. “I’m a bit claustrophobic so I left the door open, but I didn’t come out until it got brighter. I was absolutely terrified. “Everything was such a mess. The washing was blown all over the garden and our street was covered with tree branches.”

Betty moved a few doors down from her parents’ home in Myrtle Road, Eaglescliffe, when she married husband Terry and they have lived there for 50 years. She remembers the storm being so fierce and the rain so heavy, water flooded many houses further down the slope.

“Fortunately ours wasn’t one of them, but the water was pouring down the street like a river,” she said. “It started as a nice sunny morning and I was at my mother’s up the road. Then it looked like rain so I went home to take in the washing. “Before I could get it in, it was like a monsoon. It was like nothing I’d seen before, like the end of the world. “The plants were flattened and the gardens wrecked, it was dreadful.”

Her husband worked at what was then the British Chrome and Chemical Works at Urlay Nook, now Elementis, and the couple brought up two daughters and three grandchildren.

EVEN in Sunderland 28 miles away, the sky was so black Steve Wild was asked to sup up and leave the pub. “The landlord pretended it was closing time,” he laughed. Steve an 18-year-old student at the time, is now in charge of Stockton Council’s online photo collection of 6,000 images. “Sadly we don’t have one of the storm – yet,” he said.

CHRISTINE Foster missed the storm because she was baking in the sunshine on Scarborough beach.

“We heard about it on the radio later that night and were very worried about our family back in Ragworth. “My dad had come home from work and apparently carried lots of school kids from St John’s and Ragworth schools across a massive puddle at the bottom of Dumbarton Avenue.”

Recently we had a similar type of event (on a much smaller scale) in October 2017 when smoke from forest fires on the Iberian Peninsula caused daytime darkness in the region.