Widespread Events (as defined by Jonathan)

1 Severe cold and floods of January-March 1947 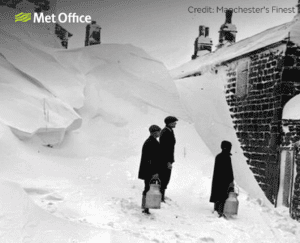 Probably the most notorious winter in the North East of England. This winter still has eye-witness accounts and is still within ‘living memory’. Coming just after the conclusion of the Second World War, the country was already still suffering from shortages and damages to infrastructure. The winter came at a really bad time. The winter didn’t really get going until the third week in January 1947, but then it all went a bit mental. February 1947 was brutal. There were huge amounts of snow in the North East in mid-month. 4 feet of snow lay at Forrest-in-Teesdale on the 18th. My dad told me they had to tunnel to get out of their house in Spennymoor. The 5 brothers amused themselves by jumping out of the upstairs windows into the giant snowdrift that was in the front garden. The severe winter continued into the first half of March 1947. We had -21.1 degC at Houghall, Durham on 4th. All the snow melt caused significant flooding after mid-month.

January 1940 was one of the coldest January months on record. The period in question was a battleground situation of encroaching Atlantic air over a severely cold Russian air mass. Where the two met, heavy snow was the result. The main action from this happened to the south of us, so we didn’t really experience anything but snow. Further south, huge accumulations of ice formed around telegraph wires and power cables (increasing their dimension up to a foot thick), which brought them down. It would take the ice about a week to melt as February began. 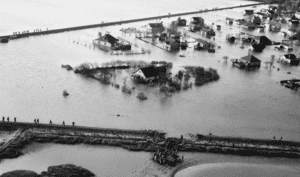 This had a major effect down the East coast of England as a storm surge followed a deep low pressure system which ran down the North Sea. Tides were about 2.5 metres above normal. The Norfolk/Suffolk coast and the South East was affected most, with extensive flooding in coastal areas and a great loss of life (307 people died, many more in the lowlands of the Netherlands). Again, the North East was spared from most of the mayhem. 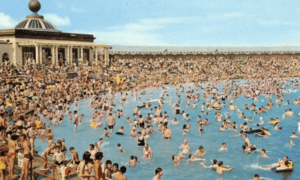 This was spectacular in most places in the UK, and it was the beginning of my fascination with the weather. It was the year I sat my O-Level exams and also had a paper round. I remember going out with the papers around 6:30am and by the time I got home at around 8am it was already boiling hot. The hot weather was incessant, and there was also a water shortage caused by the previous winter being extremely dry. The drought broke in September 1976 when the entire country was deluged in heavy rainfall, some extreme. It is Durham’s wettest September on record, suffering 193mm of rain. The wet weather continued into October, compensating itself for the hot dry conditions that had gone before.

The winter of 1981-82 followed soon after the severe 1978-79 winter. The winter was to be remembered by a) extremely low temperatures and b) a huge amount of snow, which lay for the entire month of December 1981 and half of the following month. The North East was badly affected, with roads closed and communities cut off. After the snowfall, temperature plummeted. I recorded -17 degC in Kirk Merrington at the rear of our house (it was our first winter there). There was record cold elsewhere, with the UK cold record equalled on 11th/12th January 1982.

The second Great Winter of the 20th Century, again there are many people still around who witnessed it. I was only 2.5 years old at the time so can’t remember it first hand, but my parents and grandparents told me what it was like. The cold set in just before Christmas in December 1962. Blizzards plastered the North East towards New Year. The ground lay snow-covered for all of January, February and the first part of March. It wasn’t quite as snowy for the North East as in 1947, but it was still extraordinarily cold and the cold lasted much longer. The cold continued into February, but gradually started to relent and there was no flooding with the thaw, just a gentle melting in the welcome warm sunshine which came. 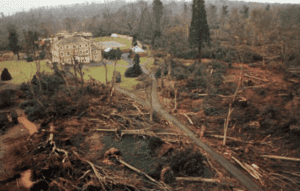 Although this was a major event in Southern and South Eastern parts of England, here in the North East we experienced nothing of the same. The October storm really passed us by and some folks could be excused for wondering what all the fuss was about. Millions of trees were blown down and millions of pounds worth of damage done. This was probably the worst gale since the Defoe Storm of 1703, but wasn’t a whole country event.

Again, this one was a mainly South of England event, with heavy snowfalls as far north as the Midlands. The most the North East got from this were some very unseasonably cold temperatures so late into April. Oxford had one of the snowiest episodes it had experienced either before or since.

9 The blizzards of January-February 1978

In January 1978, the first big blizzard affected the very North of Scotland from 25th-29th with a Northerly gale. This followed an intense low pressure system which dragged in the Northerlies. The air pressure in Durham dropped to 963 mb. The blizzards of February 1978 caught the North East because it was a classic Easterly snow situation. There was a foot of snow in Newcastle by the 13th. The exceptional blizzard of the month was in the South West of England, peaking between the 18th and 20th February.

August 1912 was one of the dullest, wettest and coldest of the 20th century. This coming after the stunning summer of 1911. It was Durham’s coldest August on record, averaging only 11.8 degC (3.6 degC below average). Although Durham was wet, it wasn’t it’s wettest ever, but this event submerged large parts of East Anglia, destroying bridges and leaving places under 15ft of floodwater. This was probably the worst August can get.

This became known as the ‘Capella’ Storm. I remember this little bugger storming through. It was a tight circulation and the centre passed over Scotland on an almost exact West to East trajectory. The North East was sheltered slightly by the Pennines, but not by much as ferocious gales were felt across much of the country. Gusts in excess of 50mph were widespread and it destroyed many a greenhouse and even a caravan site in Doncaster. The gales wrought havoc in Europe as well. There’s a Wikipedia analysis page about this storm here

See also  The 10 Snowiest Places in the UK

This month’s deluges led to the catastrophic Lynmouth Flood which swept through the tiny Devon village on 15th/16th August. There was reckoned to be about 10″ to a foot of rain dropped on the catchment area of Dartmoor over the period, which rushed down the tight valleys causing 34 deaths in the town. This month was actually a very dry one in the North East of England, with less than an inch of rain in places, so the rains were a mainly southern event.

The Summer in 1911 ran from May until the first half of September. The ‘worst’ month of the summer was June, but the first 10 days produced some temperatures in the high 20’s in North East England. There was flooding in the second half of June in the North East after heavy rain on 23rd/24th. July was superb over the whole country, including Durham. However, the south had sunnier, warmer and drier conditions. The all time high temp for July 1911 stood as a record until 2006. August 1911 was also very hot, with it’s high temp record standing until beaten in August 2003. Durham also experienced very high temperatures.

This was a South East England event, mainly around the London area. More than 8″ of rain fell in the day. The North East and Durham saw nothing of this episode at all.

Before 1911, 1906 was remembered as a very good year. May was notable for cold, with 65mm of rain measured at North Shields on 19th, but after that the summer was hot and fine, particularly in June and July, with heat returning at the end of August and into September. It was very hot in the first week of September 1906. The 1st of September 1906 was Durham’s hottest recorded September day, with 30.0 degC. This record still stands.