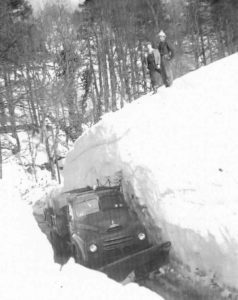 December 1962. Cold (1.8C CET), and generally quite sunny, although smog early in the month (starting on the 4th) probably killed several hundred people in London. This was the last of the great London smogs before the Clean Air Acts took effect. There was persistent freezing fog elsewhere in the country, around the 10th, followed by a wintry outbreak, with some snow across the country on the 12th and 13th. Midmonth there was rain and some severe gales as the weather became very mild. But the month is most notable as the start of the Great Freeze, one of the two greatest prolonged weather events of this century by my reckoning (the other being the summer of 1976).

The pressure started to rise on Saturday 21st; there was widespread dense fog, with many football matches postponed. Cold air started to set in on December 22nd as an anticyclone formed over northern Scandinavia, bringing very cold continental air west from Russia. On the 23rd the pressure in the Scandinavian high reached 1050 mbars. There were a few days that were cold but sunny in the daytime, and with severe frost at night. Over Christmas the Scandinavian anticyclone collapsed and a new one formed over Iceland, bringing northerly winds down across the country from Greenland.

The front separating the cold Arctic air from the north met the even colder Continental air originating from Russia from the east gave a significant snowfall as it moved south across the country. It started snowing in the far north on Christmas Eve, and the cold front moved slowly south. Hence although Christmas Day was cold but sunny in the south, with maxima ranging from -4C to 0C, there was snowfall in the north: Glasgow had a White Christmas. The snow reached Lancashire at about midnight on Christmas night, and continued to move south across most of England during Boxing Day, reaching the Midlands around midday and finally reaching London and the south around midnight.

I remember vividly waking up to snow and frost the next day. After this, a block was then formed, and cold air established. Occasionally mild air approached the south west, but the great winter was set until to the end of February 1963. Over much of the country snow lay from December 26th until March 2 (67 consecutive days). 2-4″ of snow fell in the north, but snow fell for longer (two days) south of the Thames, leaving up to 18″. The second major snowfall of the end of the month was on the 29-30th, and was accompanied by bitter, gale-force easterly winds. By the end of the month there were snow drifts of 8′ in Kent and 15′ in the west. This is the first major weather event I remember (apart from some frightening – to me – thunderstorms). I remember making a snowman, and the thick frost coating the windows.

January 1963. The coldest month this century (-2.1C CET), the fifth coldest month ever, and part of the Big Freeze. Indeed, this was the coldest month since 1814. There as not a single westerly or southwesterly day in sight: there were 20 easterly days (with the rest calm or northerly). Much of England and Wales was snow-covered throughout.

A notable snowstorm occurred on the 3-4th in the Southwest and Welsh Borders, with drifts up to 5 m deep, and 10-20 cm of fresh level snow in places; the snow was accompanied by a strong wind. The easterly winds lessened for a while in the second week, and there were some very low temperatures. The minimum was -19.4C at Achany (Sutherland) on the 11th. Shawbury had a maximum of -7C on the 12th. -16C was recorded at Gatwick and Eskdalemuir on the 13th, with freezing fog. It was slightly less cold midmonth, as winds turned slightly more northerly; however, many places still managed to stay beneath freezing from the 14-15th.

Winds turned easterly again on the 17th for the most severe week of the winter. There was a minimum of -22.2C at Braemar on the 18th: this was the lowest minimum of the winter. There was another notable blizzard on the 19-20th, particularly affecting the southeast, with widespread maxima of -5C in the south. There was freezing rain in places on the 20th. In this spell, the highest hourly mean wind speed records were set (99 mph, at Great Dun Fell, Cumbria, on the 15th, and Lowther Hill, Scotland, on the 20th). The lowest minimum reported in England was -20.6C at Hereford on the 23rd; also -20.6C at Stanstead Abbotts (Herts.), early on the 23rd, and then a maximum of only -8C at Ross-on-Wye the next day.

There was a snowdrift 25′ deep on Dartmoor on the 21st. There was much freezing fog on the 24th. For the first time since 1947, there was pack ice on large estuaries such as the Solent, Mersey, and Humber. Many places in the SE stayed beneath freezing from the 16-25th. At Eastbourne the sea was reported as frozen to an extent of 100′ offshore for a length of 2 miles. The weather turned less cold on the 26th, with some places having the first frost-free night of the month. Pressure of 1048 mbar in Scotland on the 27th. Winter as a whole was the wost since 1739-40. One consequence of the prevailing easterlies was that some sheltered westerly locations were very sunny: St Mawgan (Cornwall) reached 114.4 hours (a record). Also some westerly spots were extremely dry. See also December 1962 and February 1963. Hence I rate this the most interesting January of the century. 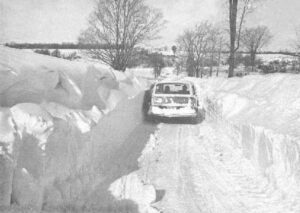 February 1963. Very cold, and part of the Big Freeze (-0.7C CET). We have not otherwise had two consecutive months beneath freezing in the twentieth century. The cold continued into March. Again, the prevailing easterlies gave some high sunshine totals in the west (e.g. 135 hours at Sellafield). Much of the country lay covered in snow all month. The month begain with cold NNE winds, giving more light snow across the south. There were some very low temperatures in some coastal regions on the 4th and 5th: -17.8C at Coltishall (Norfolk) early on the 5th.

See also  Some record low temps from around the region

There was a phenomenal snowstorm on the 6-7th affected mainly the west (the SW, Wales, Northern Ireland), and gave 1.5 m of lying snow at Tredegar (Monmouthshire; quoted at the time as “5 1/2 feet”). This is the record snow depth for an urban area of the UK. There were some slight thaws mid month: there was an appreciable thaw on the 9th, mas winds turned briefly to the south; and some places in the south had a thaw of 4 hours on Valentine’s Day, as the temperatures struggled up to 1C, before it started snowing again.

March 1963. The end of the Big Freeze. It ended gently, without widespread flooding, owing to a gentle thaw in sunshine during the first few days of the month. It still reached -16C at Braemar on the 2nd. Many places in lowland Britain lost their snow cover on March 4th – for the first time since December 26th. By the 6th it reached 17C in London. On the 2nd Cape Wrath recorded a humidity reading of only 6%.

Memories from Phil, who lived in Witton Park

My family moved from Witton Park to Newton Aycliffe in October 1962. The following winter was a corker, viewed through a kid’s eyes. There’s was lots of snow, several times, but there was an accompanying numbing cold that seemed to be there all the time. The snow that was pushed to the side of the roads got refrozen and was hard as the hobs of hell; it was difficult for older people to cross the street because of it. Everyone seemed to walk around arm in arm for safety.

I remember an eruption of Waxwings (from the northern continent I learned later) which I was thrilled to witness. They ate what few berries were left on the hawthorns. I remember seeing a depressing picture on TV (black and white of course) of a blue-tit frozen to a branch.

We built igloos and snow forts that lasted weeks. Sledging down the banks of the Ranges (now called Woodham Burn) was superlative. Snowballing was banned at school because of the consistency of the snow (almost ice). My old man was always bitchin’ about getting to work (he rode a Triumph 500 Speed-Twin).

And I remember how quiet it was after dark. Fewer street lamps then (still gas in Witton Park) and a deep, deep silence everywhere. Kept warm by pans of broth and socks for mittens.

And I was in love with Katy Boyle.?