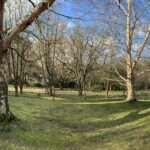 A beautiful sunny February day saw us visit the Durham Botanical Gardens for the first time this year. There were a few losses because of Storm Arwen in November last year, but the trees largely survived intact. Here’s some highlights from the walk. 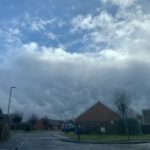 The following was observed just after the passage of a very potent shower on 6th February 2022. The ‘cows udder’ appearance of Mammatus Cloud is due to intense updraughts in the base of the cloud, effectively throwing precipitation back upwards, against gravity. They can be intensely turbulent, and aircraft are best advised to avoid them if they are on a flight path. The cold front that passed through Durham actually resulted in a sleet shower and snow was observed on the high ground in the County further south and west. Not really unusual for February, but we had so  little … 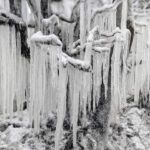 I spotted these photos on Facebook and contacted the owner Zanna Clay, who kindly gave me permission to use them. The photos show fantastic ice formations on the grass and hedges by the side of the road on Potters Bank in Durham. It was caused by passing cars spraying water from the road onto the grass, then freezing, making incredible ice formations. 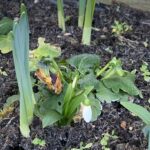 Took a walk over to Pelaw Wood this morning. It was frosty and clear overnight and the ground was still hard, making it easy to walk. Temperature was around -1 degC. Got some nice photos, and our first Snowdrop in flower when we got home. 😁 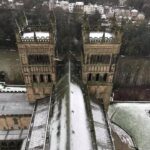 The North East of England was taken a little by surprise on Friday morning, the 8th January 2021. An area of rain had approached from the North West and turned to snow after midnight. Some places received 8-10 hours of continuous snow. Depth increased dramatically with altitude. In Durham City we had only 2-3 inches of snow, but in some of the hillier parts of County Durham snow depths of 6-10 inches were common, especially high ground to the south of the region. Here are some photographs of my own and taken by friends on social media today. Enjoy!   … 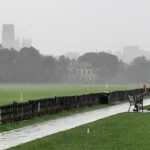 23rd August 2020. Very heavy rain in Durham Above is the scene from the Bandstand by the River Wear in Durham on Sunday 23rd August 2020. The heavy deluge dropped 9mm of rain in 10 minutes on Durham and it’s surroundings. That’s a rate of 54mm per hour, which is a proper dowpour. In the town, the narrow streets were rapidly turned into rivers and driving visibility was virtually nil. Thanks to Kev Allison for the photo via Facebook. 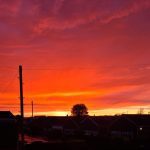 Just had this photo sent of the incredible sunset of 26th April. The sun was setting under a shallow cloud cover and it produced this red sunset and double rainbow. The cloud produced the first measurable rain for 2 weeks, in what looks destined to be one of the driest Aprils on record in Durham. The driest April was in 1938. This month only received 2mm of rainfall. 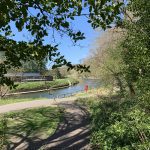 We’re all locked up at home with Coronavirus, but they let us out to get exercise, so we took the opportunity to go for a stroll in the sunshine. 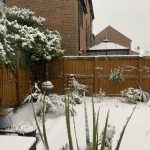 Snowfall, Winter 2019-20 Better late than never Well, after a winter composed almost entirely of wind, rain and relatively mild temperatures, the first snow arrived in Durham five days before the end of February. Amounts aren’t huge (2-3”), but at least it stopped the winter from being thrown on the ‘No snow’ pile. It’s melted rapidly though after turning to rain. By mid-afternoon, the snow had completely gone and air temperatures were up to about 6 degC. 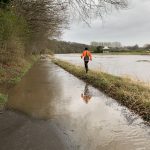 Storm Ciara batters the UK After spending a fair bit of time concentrating on the wind speeds, we sort of forgot about the rain that Storm Ciara was going to deliver. Thankfully we missed some of the squall lines that hit further south. My total for rainfall was only 22.9mm, but obviously far more fell on the catchment areas on the Pennines. A walk to the riverside was needed and as I was coming down from Gilesgate I decided the best way was the pathway that goes directly to the river down past Hild and Bede College. When I got …