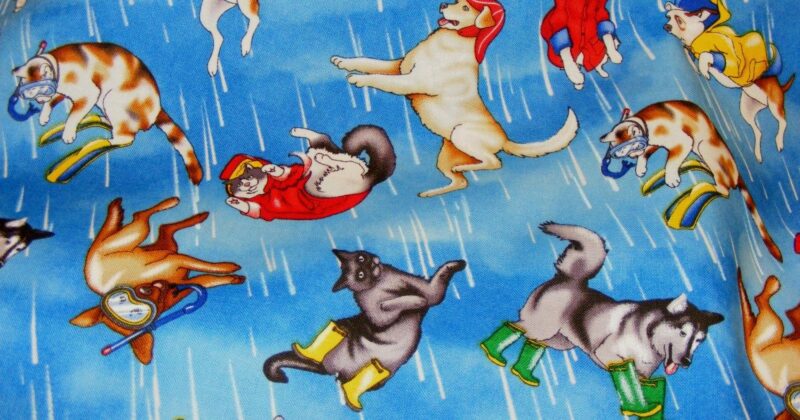 Alright my weather mateys. Who’s sick of wet weather? If you didn’t put your hand up there you must be some kind of weirdo. It seems like it’s been raining for years non-stop now. The dry soils of last spring are now a distant memory.

We often hear it said that it’s ‘raining cats and dogs’ and even ‘stair rods’, but is there an official way of telling just how ‘heavy’ heavy rain really is?

Well, those that spend their day defining all things meteorological do indeed have the official definitions all scribbled on the back of an envelope and here they are (these are for the UK):

Moderate : Causes windows and road surfaces to stream with moisture.

Heavy : Impairs visibility and accumulates as measurable rain in the rain gauge.

Moderate : Rainfall rate of between 0.5 and 4mm per hour, fast enough for puddles to form rapidly

Heavy : Rainfall rate of more than 4mm per hour; a downpour that makes a pouring noise on roofs and can form a spray of fine droplets by splashing on road surfaces and other objects.

Slight : Precipitation rate of less than 2mm per hour, although enough rain may fall to form puddles

Moderate : Precipitation rate between 2 and 10mm per hour

Heavy : Precipitation rate of between 10 and 50mm per hour

Violent : Precipitation rate of more than 50mm per hour

Slight : Few flakes and of small size; the rate of accumulation does not exceed 0.5cm per hour

Heavy : Visibility is considerably reduced by falling snow, and the snow depth increases by more than 4cm per hour.

Slight : Small hailstones, not enough to whiten the ground.

Moderate : A fall of hail sufficient to whiten the ground and to produce and appreciable amount of precipitation when melted. Often mistaken for snowfall.

Heavy : Heavy hail showers are relatively rare in the UK and include some stones exceeding 6mm in diameter. Crops are damaged and leaves are knocked off trees.