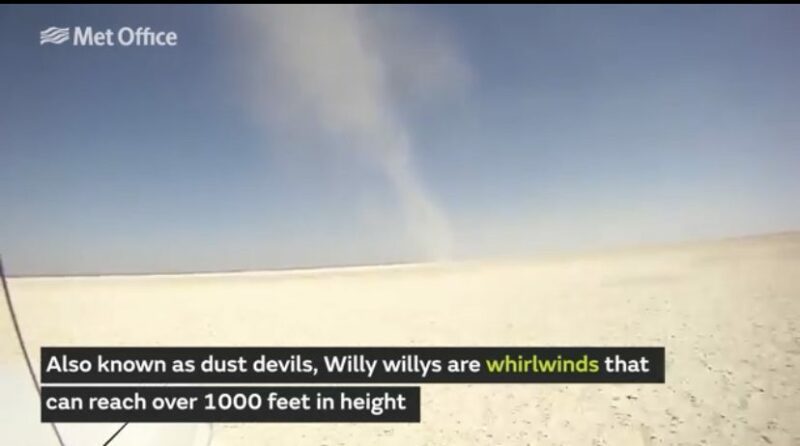 In this video we take a look at the science behind 5 of the weirdest weather phenomena.

Also known as dust devils, Willy willys are whirlwinds that can reach over 1000 feet in height. It is the dust and debris that get caught within them that makes them visible. They mainly occur in desert and semi-arid areas, where the ground is dry and high surface temperatures produce strong updrafts. In Navajo culture, willy-willy were thought to be the ghosts or spirits of the dead

A Brocken spectre is the large magnified shadow of an observer, cast onto clouds or mist. They are most often seen on mountain tops, when a person stands above cloud level. They can create the illusion of a giant shadowy figure seen dimly through the mist. Shifting water droplets in the cloud or mist can also make the shadow appear to move. Often the spectre will be combined with a circular ‘glory’, appearing as a rainbow halo around the shadow’s head.

Usually formed behind hills or mountains, where the air is stable and winds at different heights are blowing from a similar direction. The wind is interrupted, the airflow undulates and condenses into these disc-shaped clouds. They can sometimes be seen as far as 60 miles downwind of the mountains that formed them. They are also believed to be one of the most common explanations for UFO sightings.

Visible in the sky in both the Northern and Southern hemispheres, usually near the poles, auroras are mysterious and beautiful natural light shows. They are caused by collisions between electrically charged particles released from the sun and gas molecules such as oxygen and nitrogen in the Earth’s atmosphere. Many cultures have myths relating to aurora – In Finland it was believed that the lights were caused by the firefox, who ran so quickly across the snow that his tail caused sparks to fly into the night sky.

Haboob began as a name for intense dust storms over the Saharan desert, coming from the Arabic word meaning “strong wind”. It is now often used to describe powerful dust storms that occur in arid regions throughout the world. Haboobs can grow to be around 10,000 feet high and the strongest can travel over 100 miles. They are caused by strong wind, flowing down and out from thunderstorms or strong showers. These strong winds stir up a thick wall of dust, which can move at up to 60 mph.