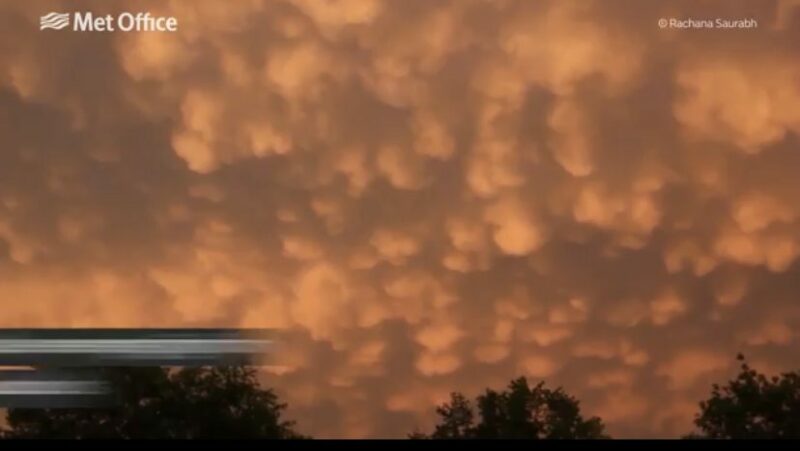 Most of us see clouds every day, but only very occasionally will you be lucky enough to spot one of these 7 particularly rare types – some of which can only be seen in very specific circumstances or locations.

One of the rarest and most beautiful of all cloud types. They are found at very high altitudes – up to around 250,000 feet Visible on clear, summers nights between 45 °N and 80°N latitude ,they appear illuminated by a blue or occasionally red or green light. We still do not know much about how they are formed, but they are thought to be made up of ice crystals.

They can sometimes be seen as far as 60 miles downwind of the mountains that formed them. An extremely rare phenomenon, where clouds form as a billowing wave pattern Occurs when there is a strong vertical shear between two air streams. This causes some winds to blow faster at the upper level, than at the lower level.

Bulge or pouch shaped, they’re usually seen emerging from the anvil at the top of cumulonimbus clouds. Formed by turbulence, they are one of the few clouds that come from sinking, rather than rising air.

Usually formed behind hills or mountains, where the air is stable and winds are blowing from a similar direction. These tall geographic features interrupt the wind, the airflow undulates and condenses into these disc shaped clouds.

Also known as a hole punch cloud – they form when part of the cloud layer turns to ice crystals which are large enough to fall. Water droplets in the cloud, cooled below 0°C but not yet frozen, will freeze if they find a particle to freeze on to or are cooled to below -40°C. Aircraft can cause this to happen by making the air expand & cool as it passes through the cloud

Formed when warm air within a storm cloud is pushed up from the ground by the cold air exiting downwards. Unattached to the storm cloud they are known as roll clouds, but when attached they are called shelf clouds.