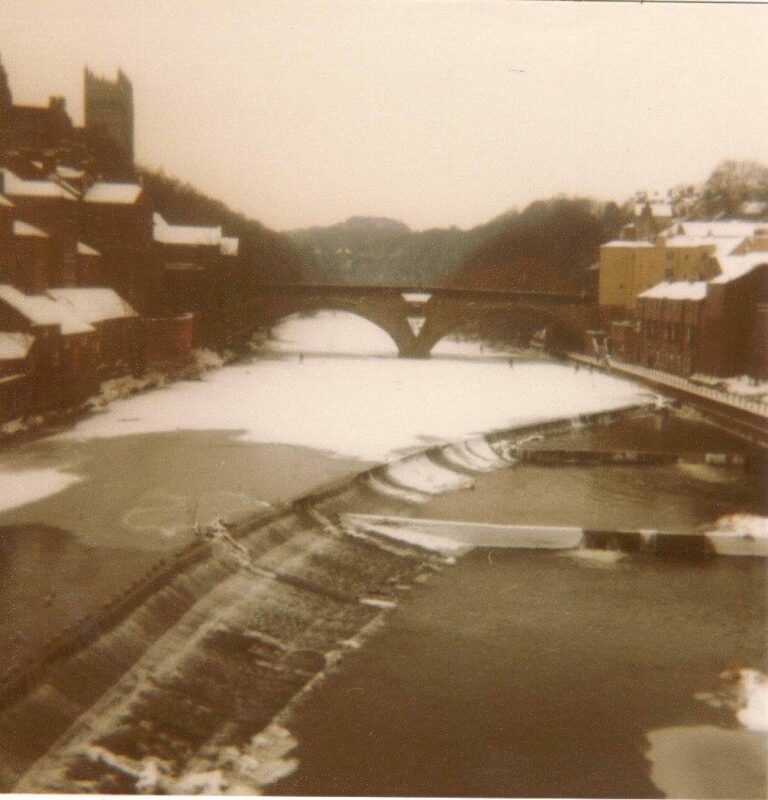 December 1981 was a phenomenally cold snowy month in Durham (along with the first half of January 1982). Snow lay for most of the month as a result of several heavy falls.

There were some brutally low temperatures, double figure negative temperatures. In January 1982 the British Record of -27.2 degC was equalled at Braemar on 10th. The English Record was set at Newport, Shropshire the same day (-26.1 degC).

The frozen River Wear at Durham was iced up enough to walk across above the weir, as can be seen here. 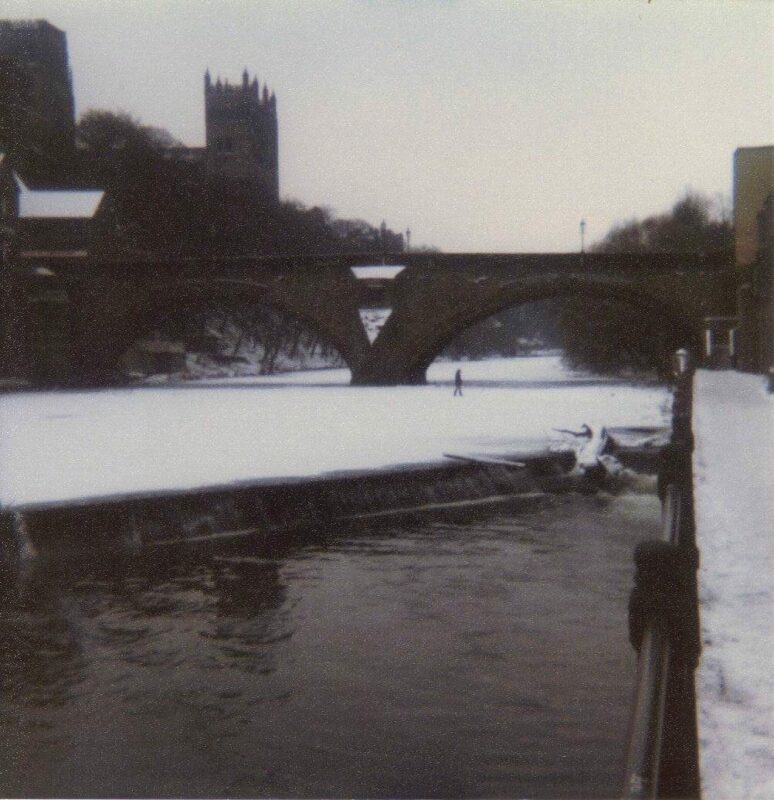 A wonderful month: the coldest this century (0.3C CET), and also very snowy. It started and ended mild, but there was a severe wintry spell from the 8th to the 27th.

As the month started, a warm front moving around a large high SW of Ireland brought temperatures of 15C to Aberdeen on the 3rd. As the high slipped away, cold fronts brought progressively colder air south.

Very cold air with hail and snow reached Shetland on the 4th. A depression then moved southeast across the country on the 7th, bringing some very cold air south after it.

A high developed over Greeland. Rain turned to heavy snow, with a sharp temperature fall, on the 8th; there was transport havoc in London following the snow. There was freezing fog on the 10th. There were some exceptional temperatures in a northerly airflow.

On the 11th, the minimum around Glasgow was -13C, and the maximum the next day only -5C. As a low crossed northern France on the 11th, there was widespread heavy snowfall in the south (26 cm at Heathrow).

It was already down to -22C by 6pm on the 12th! This was the lowest reading in December this century, until December 1995. I remember we sat around cheering the termperature down those nights. Temperatures of -20C were quite widespread. Another depression gave a real blizzard (snow and wind speeds of 95 mph in the south west) on the 13th.

A storm surge up the Bristol Channel led to extensive flooding. The Queen had to stay the night in a local pub in the Cotswolds as roads were blocked. By this time there were 10″ of snow in London, and 3 foot drifts at Hawes in the Yorkshire Dales.

There were gales and flooding in the south on the 14th as it turned slightly milder, with gales and rain and a rapid thaw. More snow on high ground in the west on the 15th-16th, and in Scotland on the 17th. Flooding in the Bristol Channel area.

High winds added to the widespread disruption: on the 19th December, the Penlee lifeboat capsized off Cornwall, with the loss of 16 hands. (a reminder that however much we enjoy severe weather, it can be tragic for some.)

The weather then turned cold again, with even more snow, particularly on the 20th in the east. There was snow on the ground, but there was no snow fall on the 25th, so not a technical white Christmas.

There was a lot of dense freezing fog around. Snow lay for three weeks in many places. There was widespread flooding at the end of the month when a thaw set in.

I remember it being really cold: the Cam was frozen (in Cambridge), and people pushed shopping trolleys across it. I was too apprehensive (or wise) to try this myself. Hence this is my most interesting December of the century.

A good winter continues. It began mild and wet at the New Year, but then became very cold from the 5th to the 15th, with some record low temperatures.

December’s cold air was never far away, and with anticyclones in place over Greenland and Scandinavia, a cold front moved south, pushed down by northeasterlies, with cold air slowly re-introduced from the 3rd, preceded by heavy rain.

Between the 5th and 8th over 100 mm of rain fell on the Southern Uplands and the Pennines. As the ground was frozen, it just ran off. As a result there was severe flooding in the York district when the River Ouse broke its banks after rising to 5m above normal. Ice floes became jammed under bridges. The flood waters then froze over.

On the morning of the 5th there were over 40 cm of level snow at Braemar. There was more snow in the north on the 7th; and -23C at Braemar; the next day Grantown-on-Spey fell to -26.8C. The battle between very cold and mild air in the south led to blizzards; the Midlands and Wales had 30-50 cm of snow on the 8-9th with easterly gales.

Many places were cut off (e.g. Torquay and Weymouth). Some drifts were 20 feet high. Lasting 36 hours, this was one of the most severe blizzards of the century across the Southwest and Midlands.Throughout the snowfall temperatures hovered around -3C.

In the far SW mild air encroached, giving an ice storm as rain fell onto frozen ground and surfaces. Electricity pylons were particularly susceptible to ice damage. As the cold front straddled Devon, the temperature was 10C to the south, but at the same time only 2C a little further north.

Then with clear skies, light winds, and snow cover, Braemar fell to -27.2C (equalling the British record for the lowest reading) on the morning of the 10th, and logged several other very low minima that month.

The maximum on the 10th was only -19.1C: a record low maximum for Britain; with a freshening easterly wind even Weymouth did not rise above -4C that day. The following day the minimum was -26.3C.

There were some other very low temperatures in Scotland on the morning of the 11th, including -26.6 Cat Bowhill, and -26.2 at West Linton, both in the Borders. The English record lowest minimum was also set early in the morning of the 10th (beating that just made the month before in December 1981!): -26.1C at Harper Adams College, just outside Newport (Shropshire).

The maximum at Benson (Oxon.) was only -10C on the 13th. The nights of the 11th and 14th were also extremely cold. Bedford (the closest reading I have for Cambridge that year, where I was at the time) went down to -15.9C on the 14th. Many places had continuous frost from the 7th to 11th January.

Then there was some freezing fog. Mild air reached Scotland on the 13th and the south on the 15th. Nevertheless, there was snow cover at Balmoral from 4 December to 28 January. However, as it was mild at the beginning and end of the month, the month overall was not that cold.

Slightly more mild than average. What a pathetic end to a wonderful winter!