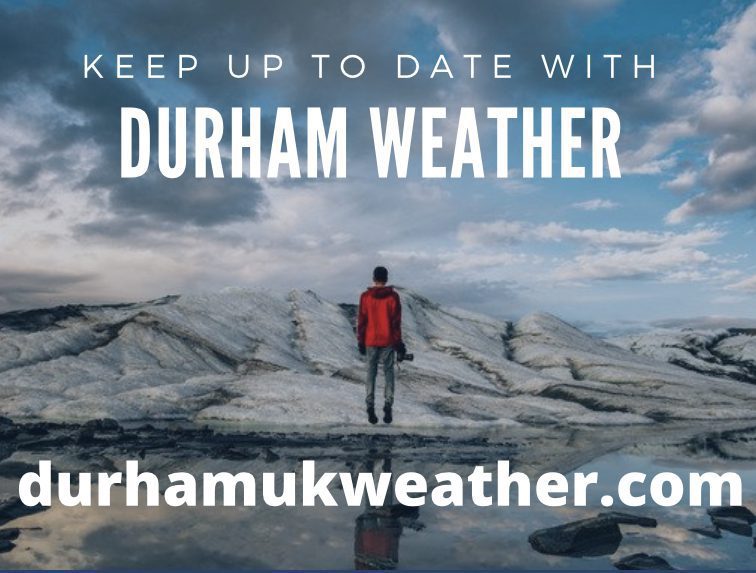 This Durham Weather website and pages are dedicated to the Meteorology of Durham City and my Weather Photography. I have been totally geeky about the weather ever since the blazing hot summers of 1975 & 1976. I started scribbling my weather measurements in a little notebook whilst still at school. I was thinking that nobody else would be interested in them. But I was wrong!

I used to live in Ferryhill, but since 2014, I have been living here in Durham City, where the climate is a little bit different. It’s not as high as Ferryhill, therefore not as draughty. It’s warmer  and slightly closer to the coast. It’s also a city rather than a large pit village, so slightly more urbanised.

This makes Durham Weather a bit different as gardens are more sheltered, having hedges and plants rather than yards and concrete and outside netties (toilets). Temperatures can be modified a bit, but it also leads to more gustiness in windy weather as there are more buildings to disrupt the direct wind flow. You also don’t lose the use of your legs in the outside netty.

What Weather Station do I recommend ?

At the moment, I’m using the rather smart NetAtmo Weather Station. Everything is connected using wireless trickery. I record temperature and rainfall, but not wind speed and direction as I don’t have anywhere to mount the anemometer in a meaningful position, and really I’m just chicken s**t about climbing on the roof to site it.

The shiny NetAtmo gizmos log everything automatically and all the averages and the figures are calculated for me, like magic itself. It’s a neat little system and not too expensive to own (under 150 quid). The sensors are battery operated and the AAA batteries last for ages.

I’ve built up quite a pile of Durham Weather related photos over the years, which i’d like to show here if I can. There are photos of clouds, flooding, sunrises/sunsets, snow, sunshine and just nature and Big Skies. I try to write a little bit about each one and schedule them as if they were posted at the time I took them. These are all on my Durham Weather Blog.

I’d also like to display any weather themed photographs sent by my kind readers. Please note I’d require accurate timings and locations of any you send if you could. There’s nothing worse than a photo where no-one knows who it was or where and when it was taken, I’m sure you’ll agree. 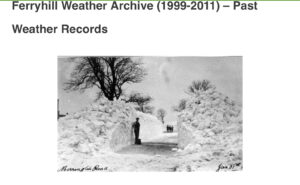 Sad I know, but it’s got the legendary snowy winter of 2010 in amongst it, so worth keeping for posterity. Ferryhill is about 6 miles due South of Durham City and a lot higher up. About 250ft higher up actually, right on top of a hill next to the old Great North Road. The main railway to London goes through it too, but currently it doesn’t stop there! 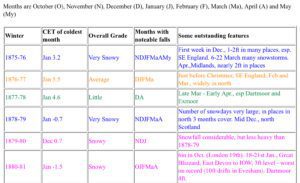 This brought it more or less up to date (the original only covered 1875-1975, a bit before my time). Each winter has been classified as ‘Little’, ‘Average’, ‘Snowy’ or ‘Very Snowy’  and colour coded, depending on the amount of snow and how generally it fell. I try to add to it each winter. I get a lot of moans about it because I don’t mention the few flakes that drifted down in a carefully hidden shower  in the middle of the night in October 1994, but I do my best.

13 thoughts on “Durham Weather from Gilesgate”