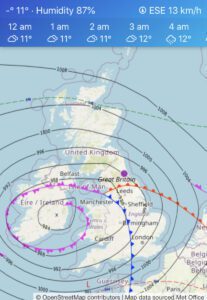 The weather in Durham in August 2020 was disappointing overall after starting out really well. It was typical of the summer really. There were no long settled spells as such at Durham, although some very warm weather was experienced in the south of the country, culminating with 36.4C recorded at Heathrow and Kew Gardens.

Thunderstorms were extensive across the country after that, but we escaped most of them in Gilesgate, although there were some near misses, with torrential rain.

Then from 17th it turned really wet and temps declined markedly, with 22.8mm on 17th and rain every day from the 13th to 30th.

Here is the chart for Tuesday 25th August. It was very wet and windy. The pressure was very low for August, falling to 986.4mb and the northern flank of this depression gave us the heavy rain driven in from the East.

As is frequent in August, the last few days can be quite cool, and the monthly minimum was 5.3 degC on the morning of 31st. This was a really nice late summers day.