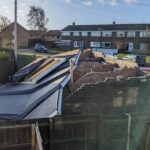 The new climate means for 1991-2020 have just been published and that is what I will be comparing to going forward. January 2022 was a mild and very dry month in Durham. Temperature wise, the mean temperature came in at 4.7 degC, which is about 0.6 degC above the new normal for January. As can be seen by the graph, the mean slowly increased as the month wore on. The highest temperature of the month was on New Years Day 2022, which became the mildest 1st January ever recorded in most places, significantly beating the old mark. In fact Nationally, … 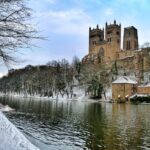 January 2021 – A cold, wet month at Durham With Storm Christoph a noteable feature Temperature After the warmth of January 2020, this month proved to be the exact opposite. The month proved to be both wet and wintry, with an exceptional snowfall in the North East area on or around the 6th-8th of the month. Some photos can be seen here. The month averaged only 2.3 degC, which is the coldest January in Durham since 2010. Not unusually for a cold month, it had 13 air frosts recorded, with the lowest temperature of -4.2 degC on the 9th January. … 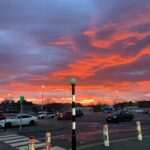 The recent trend has been that winter months have been on the dry side. January 2020 was very much in that vein. It was also very mild for first week. On the 8th/9th there was overnight snow in the High Pennines, although only rain fell elsewhere. This was heavy in places. This was actually the wettest day in Gilesgate, Durham, with 13.6mm of rain recorded, the wettest day since 19th November last year. It was very mild and wild on the 11th, and the strong winds continued until the 13th/14th as a depression passed through, with some snowfall in Scotland …

The New Year opened much the same as the old one ended, with dry benign weather and extraordinarily persistent High Pressure for the first half of the month. The high was a cloudy one, so temperatures stayed above freezing, with no fog or frost. It’s very unusual for a January to have such a high average pressure and not be cold and frosty. Alarmist headlines were again plentiful in the tabloids, with lots of doom laden promises of snow-bombs and Polar vortices, the writers not really having a ‘scooby’ what they were writing about. All done to generate paper sales. …

January 2008 A very wet, but mild month, with almost twice the normal amount of rainfall. The total ended up just 0.2mm under the 100mm mark. This eclipsed the previous record for January at Ferryhill by some 35mm. The year started with a very wet New Years Day, with 19mm faliing on the 1st. This would have been the ‘wettest day’ in most months here, but it was beaten on the 21st when a new wettest day for January was set. 23mm fell in the 24hrs. There was 4cm of snow cover on the 3rd January, but it soon melted.

January 1987. This month saw an exceptional cold spell resulting from an easterly airstream which began in earnest on the 9th, with cold air starting to feed in from the 7th. Before that here was a wet start to the month. Then the maximum at Aviemore was -5C on the 8th and 9th. On the 9th, an anticyclone anchored over Scandinavia forced a depression moved SE over Britain leading to strong NE to E winds across England on the 10th, and bringing exceptionally cold air from an unusually cold Europe. I remember the forecast from the night before very clearly; …