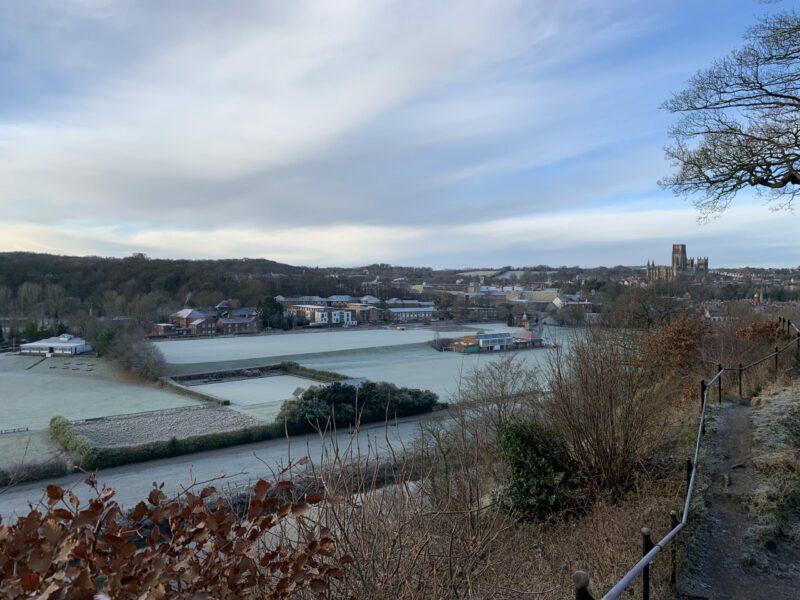 February 2021 was a month of great contrasts.

The second half of January 2021 was cold and had frequent frosts. This set the underlying theme for early Feb.

The first week of the month was very wet, with more than 10mm rainfall on 2nd, 3rd and 6th. We then experienced an intense cold period between 7th and 14th. I kept thinking back to February 1991 for a comparison. February 2021 didn’t have as much snow, but was just as cold.

Freezing Days and Ice Days have been rare in Durham over the last decade, but this period produced a few of them. The 8th-13th period averaged below zero.

The thaw began on the 15th and most of the snow vanished in the next two days. The frigid air imported from the East was swept aside by a strong, mild Atlantic flow. Temperatures were in double figures by the 17th and pretty much remained that way until the end of the month.

Spring had well and truly sprung. 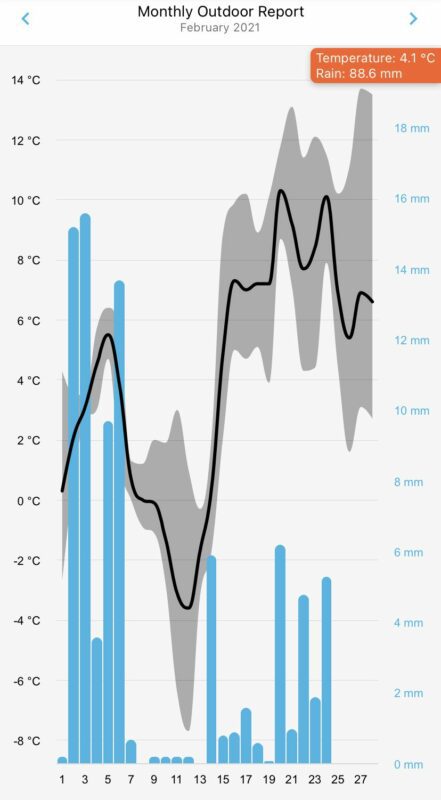 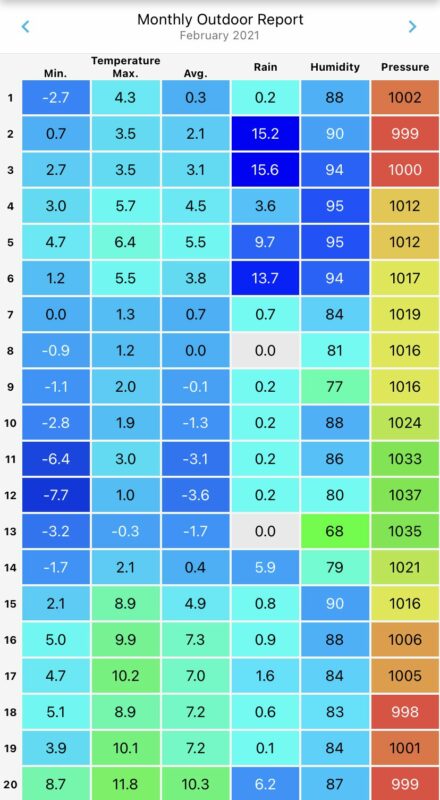 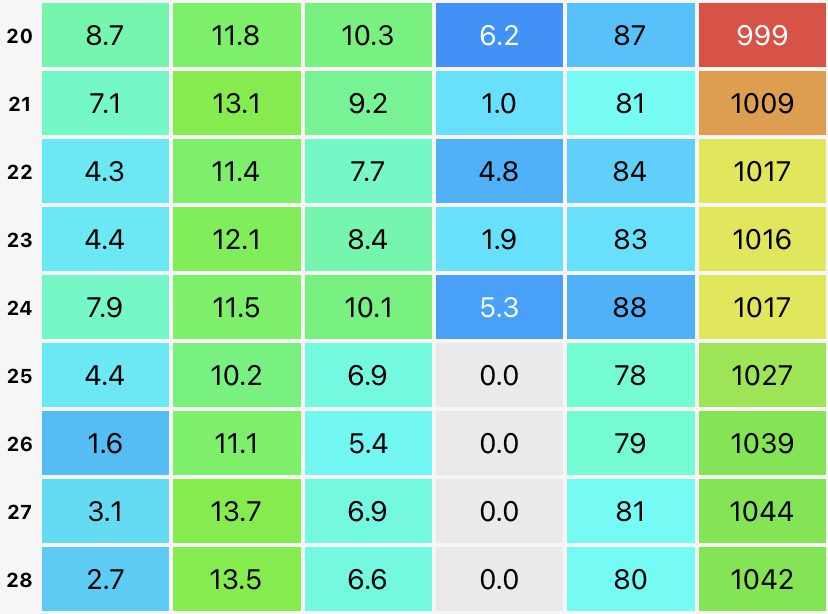 First half v. second half

As you can see, the average temperature of 4.1 degC completely masked the two halves. A reminder of how unrepresentative a single figure can be regarding monthly mean. 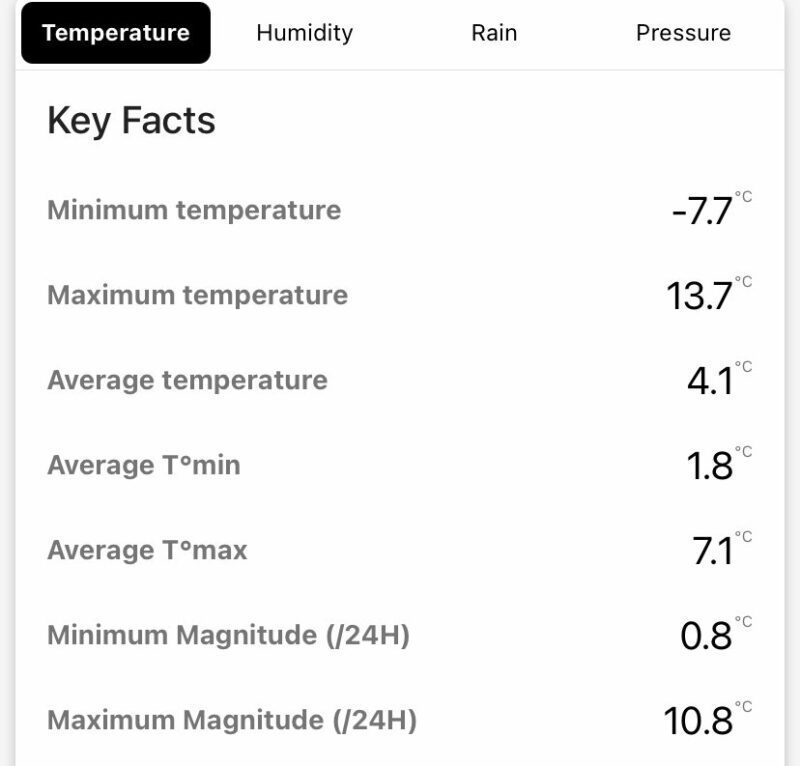 The bulk of the rainfall total of 88.6mm came in the first half of the month. About 8mm came from the snow melt after the 15th, showing that the snow tended to be of a ‘dry’ powder type. This also meant there were few flooding problems after the thaw.

Atmospheric pressure was low at the start of the month and again around the mid thaw period as the Atlantic zonal flow re-asserted itself.

There was then a strong build of pressure in the last days that continued into March 2021. 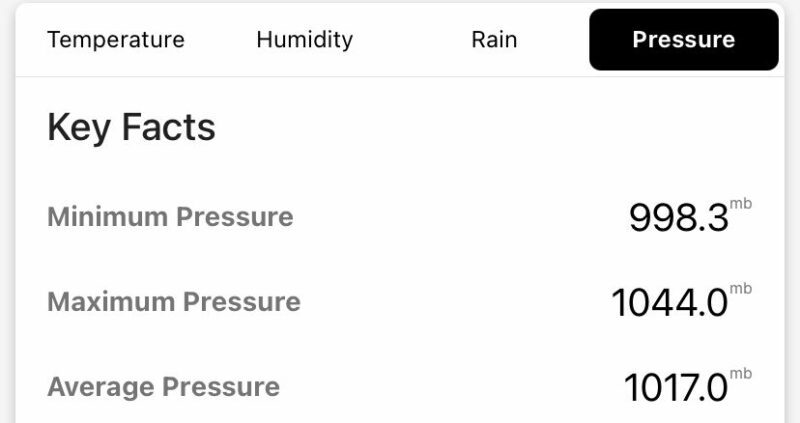 If we look at the whole winter season, December-February, it will show that January 2021 was a cold month, but the over-riding theme was of wetness.

378mm of rain during the winter season is high and more than 2.5 x that of the previous winter. A lot of this rain fell as snow at higher levels and the winter can probably regarded as ‘Snowy’ there.

I’m going to have to give my Bonacina classification some real thought.