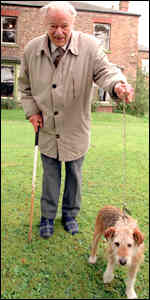 World-renowned amateur weather forecaster Bill Foggitt has died in hospital at the age of 91.

Mr Foggitt’s unconventional methods – using signs in nature rather than science for his predictions – made him the scourge of professionals but alegend among the masses.

One of the high points of his career came when the Association of Science Education used Mr Foggitt’s “sensing” methods in a textbook for the national curriculum.

He had long argued that plants, animals and insects were provided a much better guide to short-term local climate changes than technology.

In 1985, Mr Foggitt achieved a higher percentage (88) of accurate daily summertime forecasts than two professional weathermen, including Michael Fish, who trailed with 74 per cent.

And during the winter of 1968-69, he managed the astonishing feat of issuing a broadly accurate week-by-week forecast.

Mr Foggitt, from Thirsk, North Yorkshire, had been a local legend for some time, but achieved international fame in the year he out-forecast Mr Fish.

During a cold snap in the winter of 1985, the Met Office warned of a prolonged cold spell, but Mr Foggitt had witnessed a mole poking its head through the snow and dismissed the prediction. He was right.

Television crews from around the world headed for Thirsk market place to hear how trees, pine cones, moles, and climate records kept by his family for more than 200 years were used by the forecaster.

His biographer Mike Cresswell said: “He was one of the county’s great characters. He had the perfect name for the interest he pursued, but it was more than just that.”

Mr Foggitt, a widower, had originally wanted to be a priest but became a teacher after an unfulfilling stint behind a chemist’s counter.

He ran through a range of jobs including a storeman at an ICI ammunition depot and saw war service with the Ordnance Corps.

Mr Foggitt became a Methodist lay preacher after failing his studies at a Church of England college, but returned to Thirsk after being knocked down by a car and badly injured.

During his convalescence, he began studying the family’s weather records – started by his great-grandfather to help understand the flooding problems in Yarm, Teesside – and became fascinated. Mr Cresswell added: “He taught us that for all the scientific advances, the everyday behaviour of nature remains one of the best guides to predicting the weather.”